About Our Senior Pastor/General Overseer 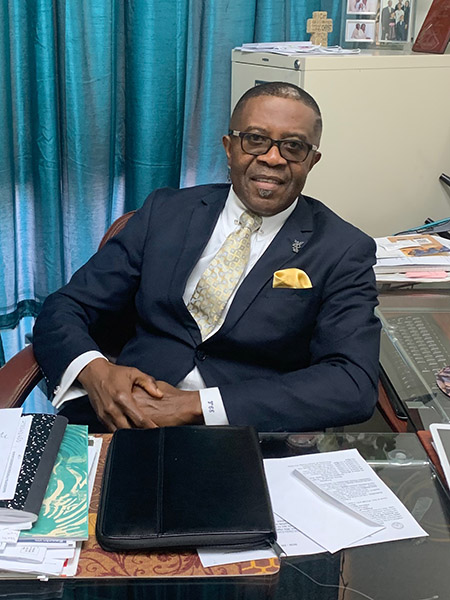 Dr. Val Egbudiwe is by calling, an Apostle and Pastor. A Bachelor of Science graduate of the University of Nigeria, Nsukka, Theology trained alumnus of Faith Bible College and Seminary, Lagos, Nigeria and a trained Chaplain (Pastoral Care Department, Methodist Health Systems, Dallas, Texas, USA). He is a published author of Christian books including "The Midnight Gate" and a Doctor of Ministry graduate of Jacksonville Theological Seminary, Florida, USA.

Val Egbudiwe was called of God with a unique mandate and anointing to deliver God's people from the bondage of sin, Satan and poverty. God's presence is always manifested as God confirms His Word with signs and wonders when he preaches the Word. A very powerful, vibrant and eloquent preacher, the ministry of Val Egbudiwe is in high demand in many parts of the world. While in Nigeria, Africa, he basically preached in crusades winning souls in thousands especially within the rural areas and preaching revival in churches. The service of God has taken him to many nations of Africa. He has also ministered at the famous Trinity Broadcasting Network (TBN) Television studio watched by millions of people in South Africa as well as done extensive evangelistic work in Europe including the former communist country, Romania.

With a great insight into spiritual warfare, Val Egbudiwe also operates in the miraculous as his ministry is always accompanied with demonstration of the power of the Holy Ghost to save, heal and set the captives free. He is licensed and ordained by Harvests Fields Ministries, MO, USA and the Redeemed Christian Church of God, North America. He is the Founder of Val Egbudiwe World Outreach (VEWO) Incorporated, an international Non-Profit Evangelistic and Apostolic Organization based in Dallas, Texas. From 2005 to 2019, he was the Pastor of Chapel of Revival and Miracles Church, a parish of The Redeemed Christian Church of God based in Mesquite, (Dallas), Texas that was planted by him.

He has ministered in several churches in many states in the US bringing revivals as God has used him to turn many to Christ in these churches. Val Egbudiwe is married to his wife, Pastor Edith and they are blessed with three girls and one boy.